In 1991 a car smashed into Anthony Baker’s motorcycle fracturing his left elbow. Luckily the driver was insured and Anthony had extensive surgery to try and regain use of his arm. The driver was sued and eventually paid out in 1995. Ant took some of the money and disappeared to India for 7 months. Having always loved elephants, it was not difficult to become fascinated with Ganesha, the elephant headed Hindu God. 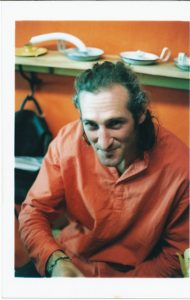 On his return he put his attention to deciding what to do with what was left of the insurance money. Many of his artist friends from Observatory visited and ate at his home, clearly enjoying his food. It was also obvious that they were lacking their own creative outlet in the suburb and the idea for a cafe for artists took shape. With the help of his brilliant, creative friends, social and artistic events were dreamt up to market Cafe Ganesh … much fun was had, memories and babies were made, debates abounded and a culture of inclusion manifested as it slowly evolved into what it is today.