Fresh out of university I got an acting agent and soon discovered that I was (after four years of studies) officially qualified to be in TV commercials, and not much else.

Theatre auditions were rare, and the only way to stay occupied and survive my twenties was to hit the commercial scene hard, preferably nipples first. I auditioned for toothpaste commercials and cereals and cars for places like Australia or New Zealand or France. I sat in waiting rooms dressed as a ‘business women’ or a ‘young mother’ with leggy blonde models who usually got the job. How did being an actor come to this, I thought as I applied lipstick and powder in the bathroom next to Busty Bombshell #3. And some of those auditions I got, but it was rare and not nearly enough to cover the bills.

So to make ends meet I did what every aspiring actor does: I got a job as a waitress. The obvious choice was Café Ganesh, a small, innocuous-looking place off a bare cement street in a suburb called Observatory, where we spent the majority of our time anyway. Obz was an old, grimy neighbourhood where the sound of trains and traffic relentlessly heaved and mingled with the black city smog, and beggars and eccentrics and crazies all lived happily together.

Slap bang in the middle was Cafe Ganesh, a place that – like every true Afrikana – contained a little bit of everything. The interior was electric pink and bright blue, with reams of Lion matches wallpaper stuck in between. Indian effigies squatted in the corners and eyeballed us whilst we ate Melanzane Parmigiana and crab meat samoosas. Sis Beauty cooked up her famous Umnqusho and beans whilst the speakers pumped with TKZee or Mano Chao, result being that you were never quite sure where the hell you were. Did Spain and India have a gang-bang in Gugulethu? Who knew. What was clear was that you were somewhere else.

Then, there were the people. The place was a bohemian hot-bed of crazed artists, a shotgun-salad of mixed races and ages and languages. A night at Ganesh could start off calmly at five pm with a handful of quiet souls and a couple of beers, and then burst into a feverish mess at eleven with students and foreigners and poverty-stricken intellectuals all clambering onto the bar and all over each other to get a drink or a fix or a date.

The only prerequisite for being there was that you were passionate about something, be it art or theatre or booze, and all three were consumed and ladled out in large amounts on any night of the week. Oh the people we saw! The things we did! The nights spent dancing butt-naked on tables and screaming and reading poetry! There was just enough craziness to go around to keep everything moving along in a really interesting sort of way, and we gravitated to that place like bees to a hive. It was our asylum from everything else.

Even on the nights we weren’t working we were there, drinking quarts of beer and eating falafel off melamine plates. It was our home, albeit a fairly dysfunctional home with a drinking problem. Sleeping at night mostly ceased. We were young, our livers were strong and there was such passion in that place. That was where I learned about artists. That’s where I fell in love with all of them. 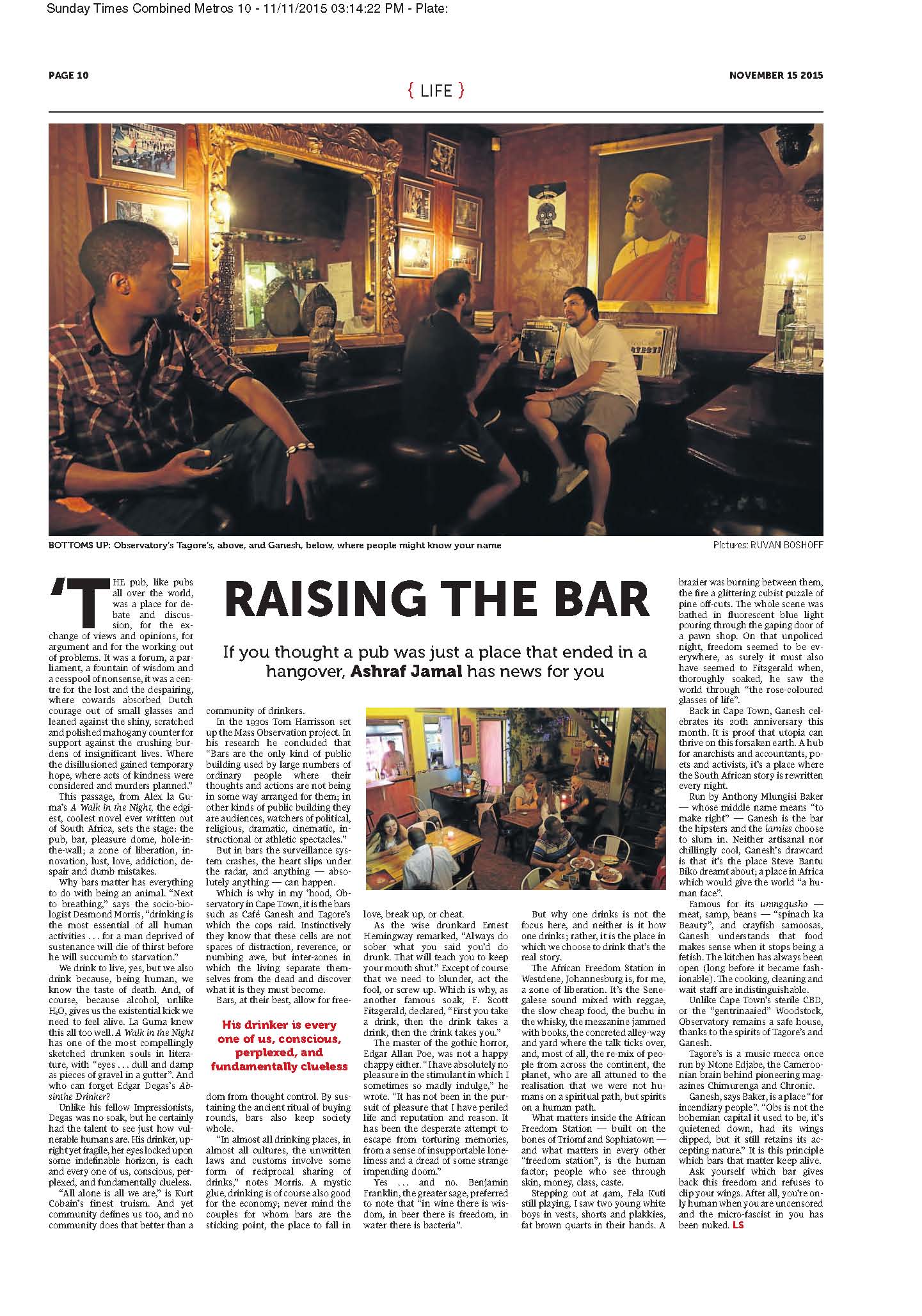